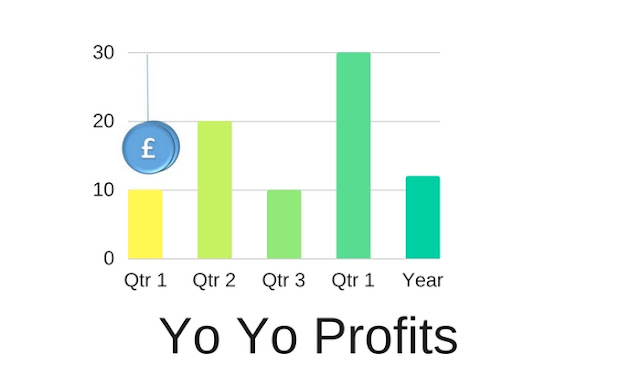 “Our profit goes up and down like a yo-yo. One month we’re doing really well, the next month is a disaster.”

When the new client said that to me when we first met, I initially assumed that they worked with very tight margins and the costs of their raw materials fluctuated, or that perhaps they suffered from currency fluctuations.

But of course, it turned out to be something much more prosaic…..

They paid their office rent on a quarterly basis – and so once every three months, it looked like their expenses were out of control, eating into their profits.

This led the business owner to some very bad business decisions. While he always had the money to pay the rent, he was under the impression that his business was unstable, and was therefore reluctant to invest in areas that needed development.

But of course, his business wasn’t unstable at all.
The rent covered an entire quarter – and so instead of being lumped as one massive expense in his accounts once every three months, it should have been spread over three months.
It’s basic accounting, and yet I can’t tell you how many businesses make this error, skewing their figures and giving business owners a false sense of their financial position. Unfortunately, many business owners are not aware this is happening.
It works the other way round, too. Put yourself in the shoes of a gym owner. Every January he has a spurt of new members eager to work off their Christmas excesses. He offers a discount to people who pay upfront for the year, leading to a flood of cash. He feels pretty good about life!
Let’s hope he doesn’t splurge too much…. Because, the trouble is, those people weren’t just paying for January – they were paying for an entire year.
Over the next 12 months, the gym owner will have to use all that money to pay for the equipment, staff and his own rent – leading to an entirely different financial picture… Possibly even a loss.
Even worse, some of that money which seemed like a sure thing in January can disappear overnight. Six months down the line, many of those January sign-ups will decided to quit, and ask for a partial refund.
If this gym owner’s accounts in January showed a bonanza month, he might expect a bonanza year as well. And yet that might not be a truthful representation of what was happening in his business.
In reality, those payments were meant to cover 12 months – and should be spread out in his accounts, accordingly. This is a far more accurate picture of his finances.
A related issue for many businesses is that you have to enter expenses and revenues when they are incurred, rather than when cash changes hands.
So for example, if you send out a long list of invoices in January which don’t get paid until April, it is essential that you record these as January sales, not as April sales. Similarly, if you put in an order for the delivery of raw materials in June, that’s when it needs to appear on your accounts – not in August, when you pay for them.
And if you know that you’re expecting a bill in June and it hasn’t arrived, you still need to account for it in June – then chase it up!
The key is that you need an accurate representation of your income and expenses in any given period.
If you simply record when the cash comes in and out, you’ll get a distorted picture – and we all know what that leads to: Bad business decisions…. Mistakes….. Disaster!
If you would like confidence that your accounts are accurate and complete at all times, let’s talk. This is one of our key services to our clients, and we’d be delighted to help you too.
Share This Article

A change of plan

Without a plan, you’ll meander aimlessly, instead of taking deliberate, targeted actions to take your business to a well-defined goal.

Doing a once-a-year profit and loss accounting exercise isn't enough; you need to plan your *cash flow* too! In fact, it’s vital.