How to Get Staff To Engage With Your Budget

At the Astounding Leadership Insights conference which we sponsored in September, one of the presenters told the following powerful story.

A man was in a road digging a hole, surrounded by a group of people directing him. Each time he’d finished they told him, “That’s not what we wanted, dig another one.”
Before long, the street was littered with holes – and the man digging them was frustrated and annoyed. He had no idea why he was digging, so he saw the whole exercise as pointless.

Eventually, one of the supervisors mentioned the truth: They were looking for the gas mains, because there had been a leak. However, they’d lost the plans and had no idea where the gas mains were.

Immediately, the digger’s attitude changed. Now that he understood why he was digging a series of holes, he worked with renewed enthusiasm, and even made his own suggestions about where it made sense to dig.

The moral of this story? If you want your staff to engage with what they do, make sure they understand why they’re doing it.

It’s particularly relevant when it comes to your budget.

Many companies have trouble getting their staff to take the budget seriously, and stick to their spending limits and priorities. 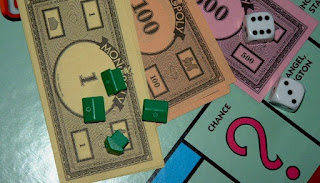 One of our directors, Shirley Hoy, loves to relate how in a relative’s company, this became such a problem that he handed his staff Monopoly money. Every time they wanted to spend money for their department, they had to hand some over.

The point was to help them visualise their share of the budget, and make them more accountable for how it was being spent. It was certainly a creative solution!

But it’s just as important to explain to staff why the budget looks like it does, and how their own portion of the budget fits into the overall strategy.

Understanding where your piece of the jigsaw fits in is a very powerful motivator.

Without that context, the figures in the budget look random and abstract – especially if the
budget is divided up in the plain, faceless way that so many companies insist on.

With that context it gains meaning and purpose.

So tell your staff how the budget helps your company achieve its goals. For example, it is designed so that you have everything in place to raise turnover by 20%, or to help you conquer a new target market.

Then explain their portion of the budget.

Tell them: “Your branch is getting £X in order to make it a flagship for the UK,” or “We are increasing your budget for communications training, so that we can ensure the team works together seamlessly – and is ready to take the lead next year in a major project.”

Do that and not only will you have them fully on board with the budget, but – like our man in the hole – they may be able to make valuable suggestions about how to work within the budget, too.

If you’d like help creating a budget that will push your business forward and engage staff, let’s chat. It will help your business run much more smoothly. Is this role missing in your business?

Ambitious company owners who want to grow need a trusted advisor. Someone they rely on for good, objective business advice without letting emotions interfere. My business mantra is: Adapt or die.If you’re not moving forward, you’re moving backwards and that is why you need to continually invest in yourself... Understanding where the profit lies in your business can focus attention but how can you do that if you're not collecting the right data in the first place.