09th February 2009
It is perhaps not surprising that insolvencies are on the increase in the present climate, but the rate of increase is high.
Last week The Insolvency Service published the statistics for the fourth quarter of 2008, and they do not make pretty reading. Compared to the same quarter in 2007 there was a 220% increase in the use of mechanisms such as Administrations, Receivership's and Company Voluntary Arrangements (CVA). There was also an increase of 52% in company liquidations in the same period.
It is actually early days yet ...as the impact of the economic environment filters through, particularly to the large base of smaller businesses in the UK. Therefore annual statistics for 2008 are not really that descriptive, but this chart (from the Insolvency Service press release) already shows that we are at levels not seen for many years. 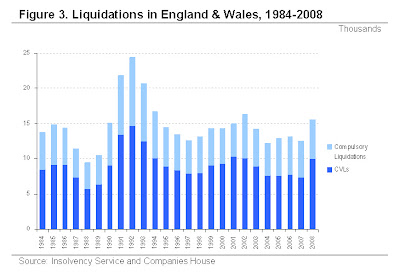 The level of failures in 2008 equate to 1 in 150 of all active companies in the UK!
The level of personal insolvencies is at almost the same level in 2008 as 2007, although many commentators are suggesting at 50% increase in 2009! What is perhaps of interest is that the proportion of bankruptcies is increasing. It has been suggested this is because unless there is an adequate source of income it is now increasingly difficult to fund a Voluntary Arrangement.
As ever ... the message has to be act early. If your business is facing difficulties moving quickly to look at options will often mean that the solutions are more palatable. It is easy to get into a position of denial, but that is very dangerous. Most business owners have no real experience of the present trading conditions or the prospect of insolvency. Most do not understand the implications. So seek help early and fully understand where you are and the ways forward.
Share This Article

If your bookkeeper & another finance team member suddenly went sick what would be the impact? Can invoices be sent? Are bills, payroll and payments authorised?

Where do they get these numbers from?